So you already have an app and you are trying to engage users even more... What is a better way to do that than using one of the coolest iOS 10 features - iMessage integration?

This Tuesday Apple rolled out iOS 10 together with Messages framework. It provides building blocks for creating iMessage extensions, which can be either self-contained apps or shipped inside a parent app. To get acquainted with the topic you can watch videos from WWDC 2016 (#1, #2) or follow this tutorial in which I will try to explain how to build such an extension.

In a previous entry about UI bindings I have introduced an application called ReactiveTODO. It is my playground to improve coding skills and test some new ideas. After iOS 10 debut I came to a conclusion that the application is certainly missing a share with a friend feature. And I decided to build that. The final effect is presented below:

The design goal was to introduce a new integration with as little code as possible. The reasoning is that an indie developer would not like to spend weeks on implementing any extensions. In order to achieve the goal, I decided to reuse a todo note list, the main view controller of the application.

The "zero step" to introduce iMessage integration for existing project is to make this project build under Xcode 8 with iOS 10 SDK. Having a code base in Swift 2.2, I decided that transitioning to Swift 2.3 is a better idea than Swift 3 for now:

How to transition to Swift 2.3? 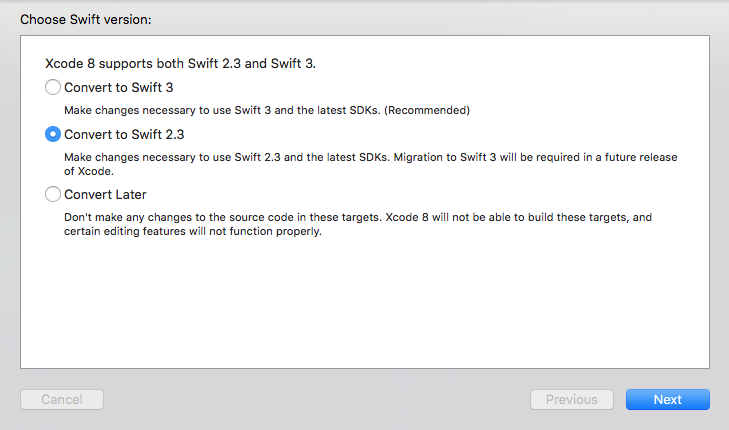 Xcode will automatically set Use Legacy Swift Language Version to Yes under build setting for the project.

Wait, is that everything? Not really. All third party frameworks have to be rebuilt with Swift 2.3 too. I am using Carthage to build those frameworks, so the first step is to update the application to the latest version for Xcode 8 support. Having latest Carthage on board, it is time to update the dependencies:

Usually I do not use --platform ios setting. This time I had to because of Cartography dependency, which does not compile Mac target for the time being. The --toolchain com.apple.dt.toolchain.Swift_2_3 switch tells Xcode to build dependencies with Swift 2.3 compiler. Otherwise, libraries that support both Swift 2.3 and Swift 3 could build with the latter, which is not compatible with the former.

As expected, the dependencies for the project will still not build correctly:

To create an empty iMessage extension, select File > New > Target.. and pick iMessage Extension option from a dialog window. It will create a new group (named after your extension) which contains a storyboard, property list and a view controller source stub. 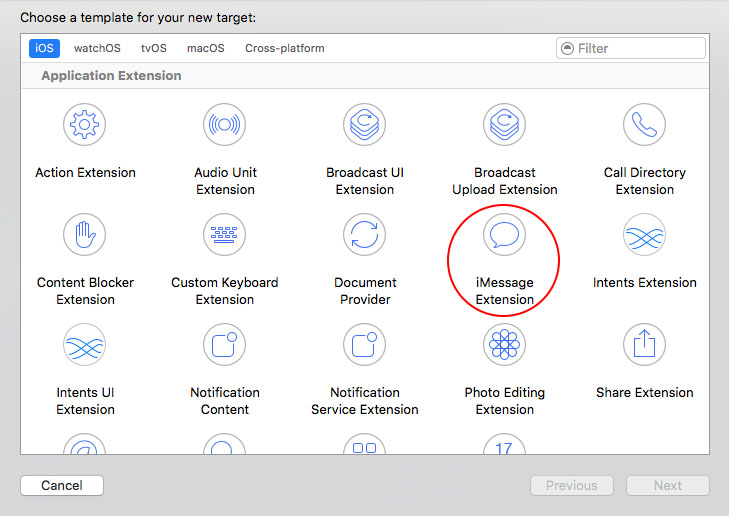 If you examine the view controller stub closely, you will notice that it is not your usual UIViewController instance, but rather the MSMessagesAppViewController class which derives from the former. This means that:

To reuse existing view controller in an extension it has to be available for the extension target. By default, it is not. There are a few ways to achieve that:

If you are serious about maintaining your application, then the first option is basically a no go. Soon, you will find yourself repeating that all over again when doing some changes or implementing the next extension. Build time will skyrocket and the code quality will plummet. We will proceed with a framework approach then. 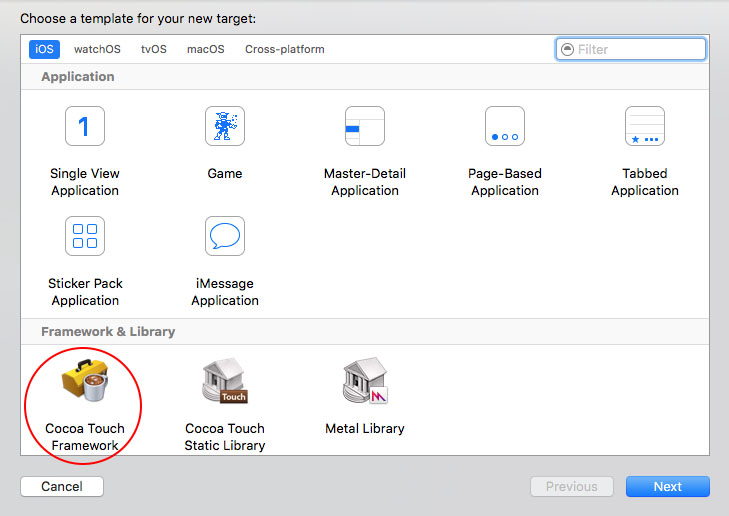 There are a couple of facts that you need to know about frameworks, extensions, and tests setup before we can proceed:

By combining those four rules we can come up with a setup for our application:

Considering above, to extract a framework from the main target we have to do the following: 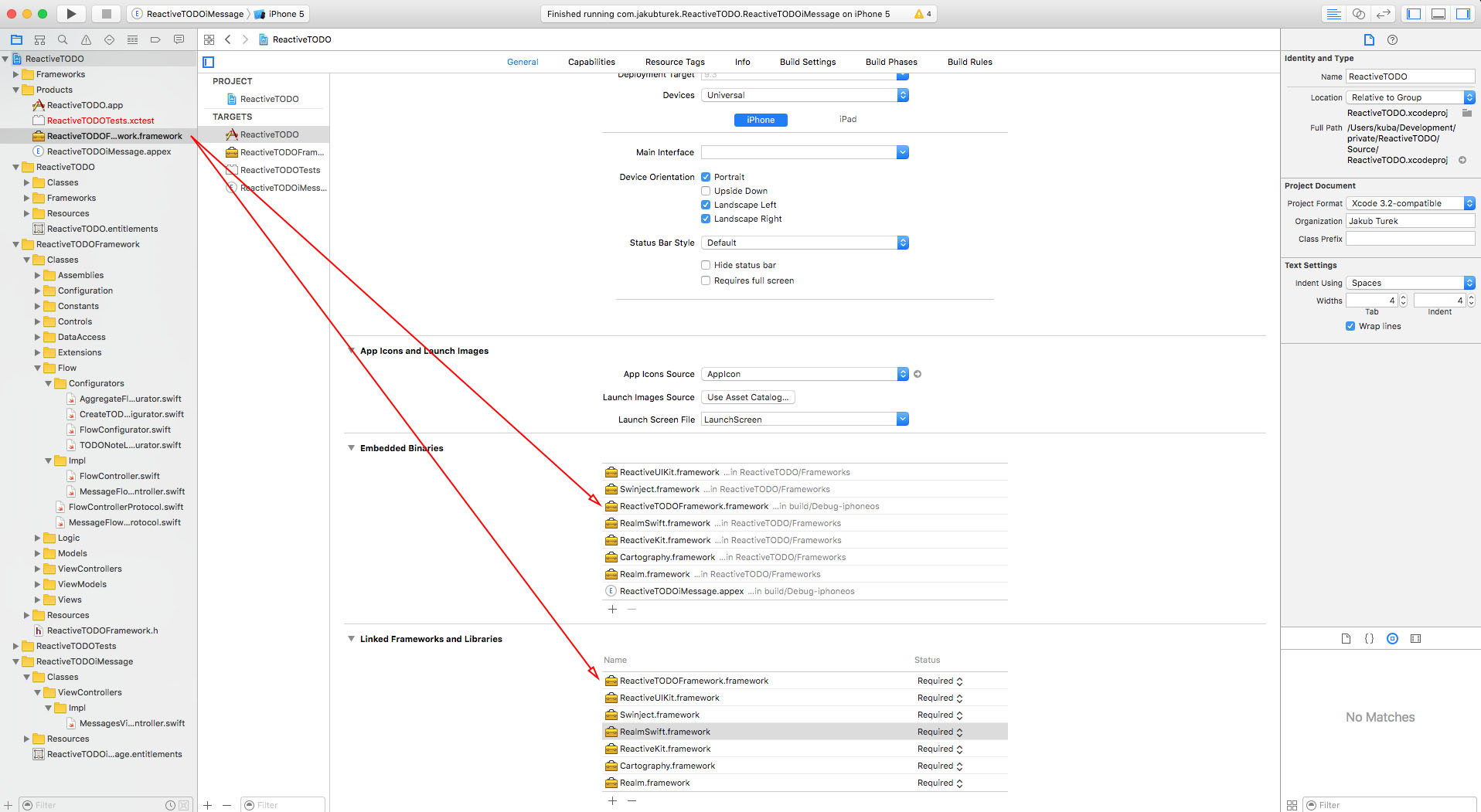 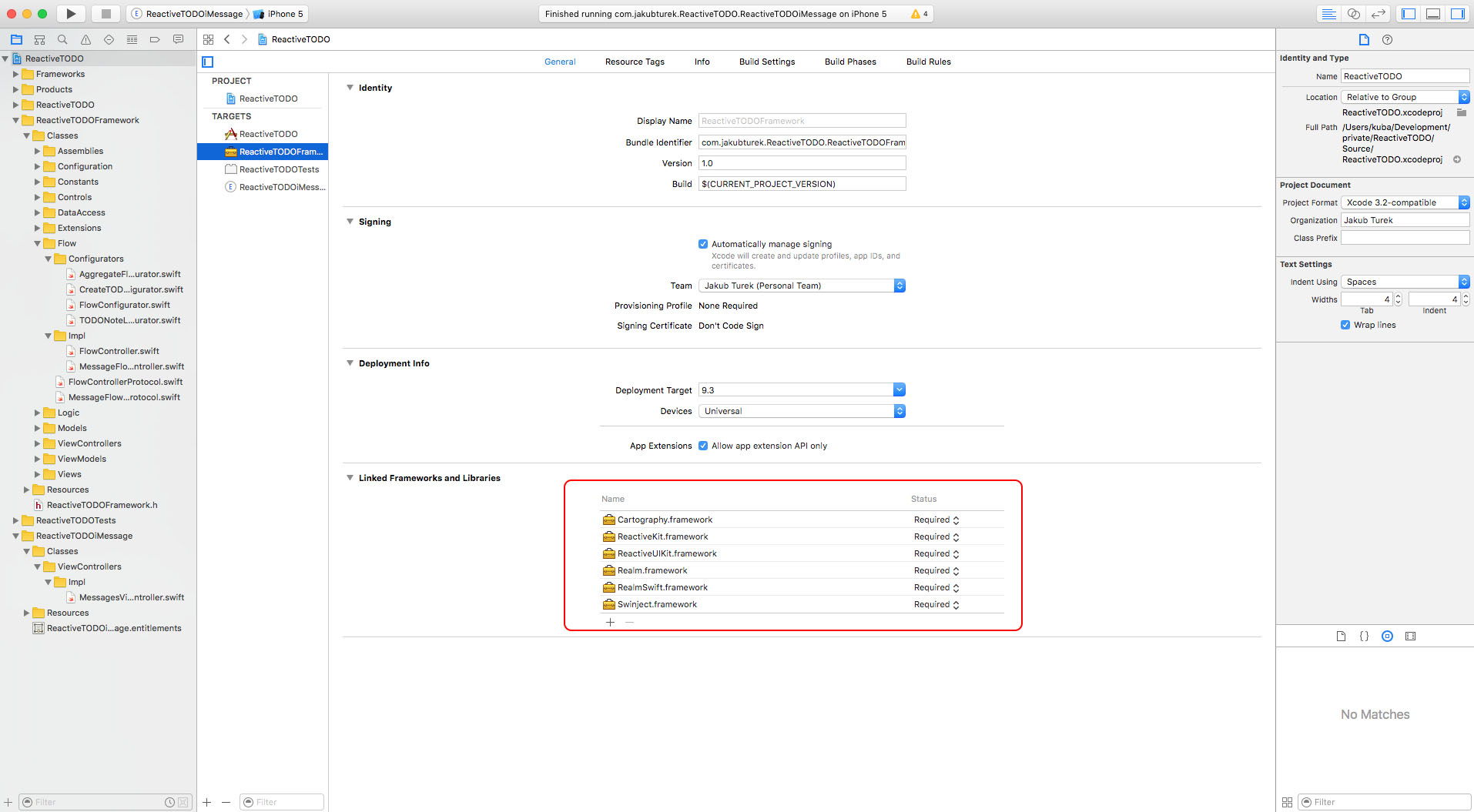 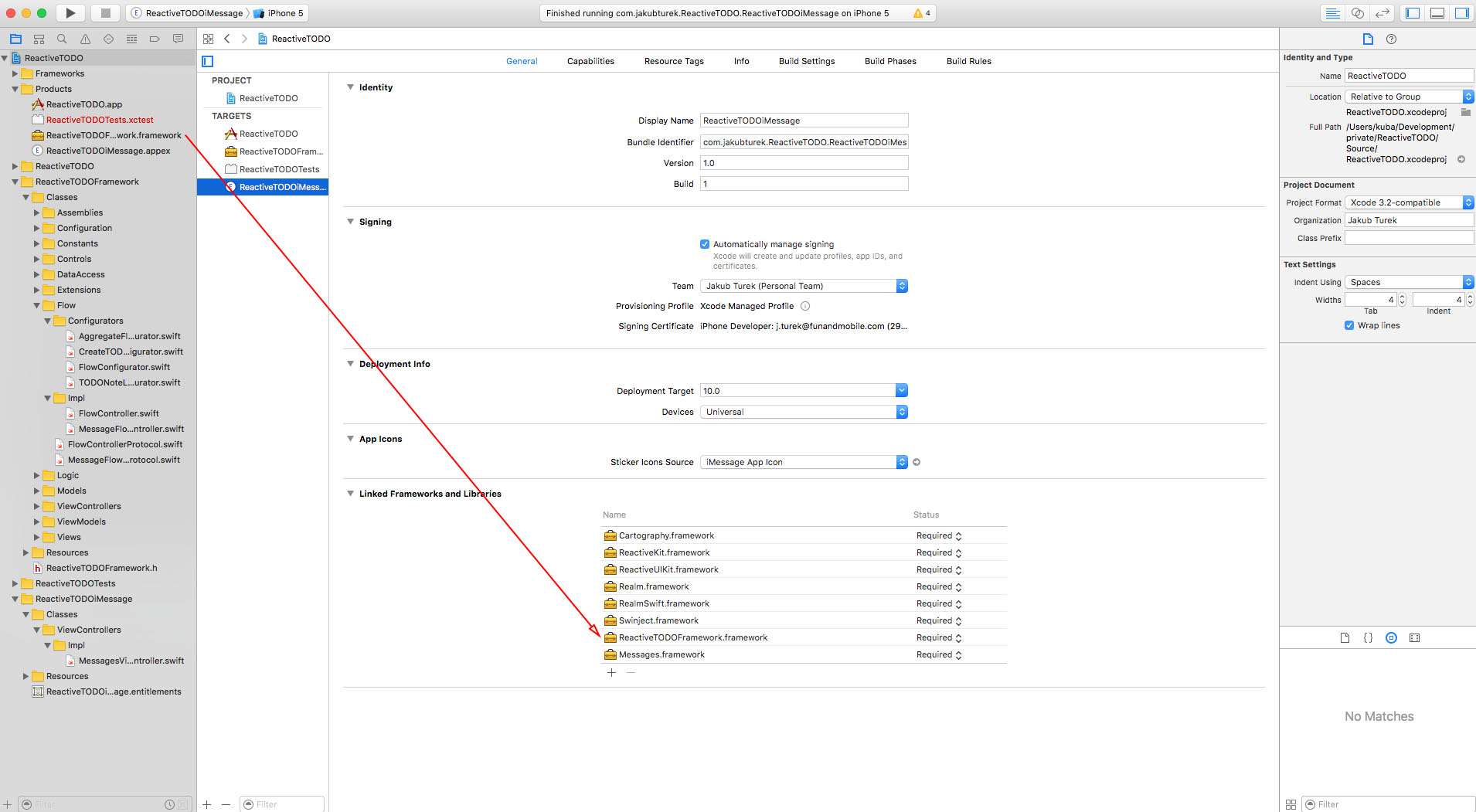 The project should build now. You should be able to use classes and protocols defined in shared framework by simply adding an import SharedFrameworkTargetName on top of the source file. Also, do not forget to set public modifier for every class / protocol / method from the shared framework that you want to use. Otherwise it will not be visible in other module.

Sharing data between the app and the extension

Since we want to show exactly the same notes in the app and the extension, we need to share our Realm database contents. Out of the box, both of the targets use different file space, so separate databases are created. The result is that the todo notes created inside the application are not visible to iMessage extension.

Fortunately, there is an easy fix for that. First, we need to enable app group capability for both the app and the extension. This can be done by flipping the on-off switch in App Groups section under Capabilities tab in target settings. Then, a group has to be created with a + button. Name the group as group.<your_application_bundle_identifier>. 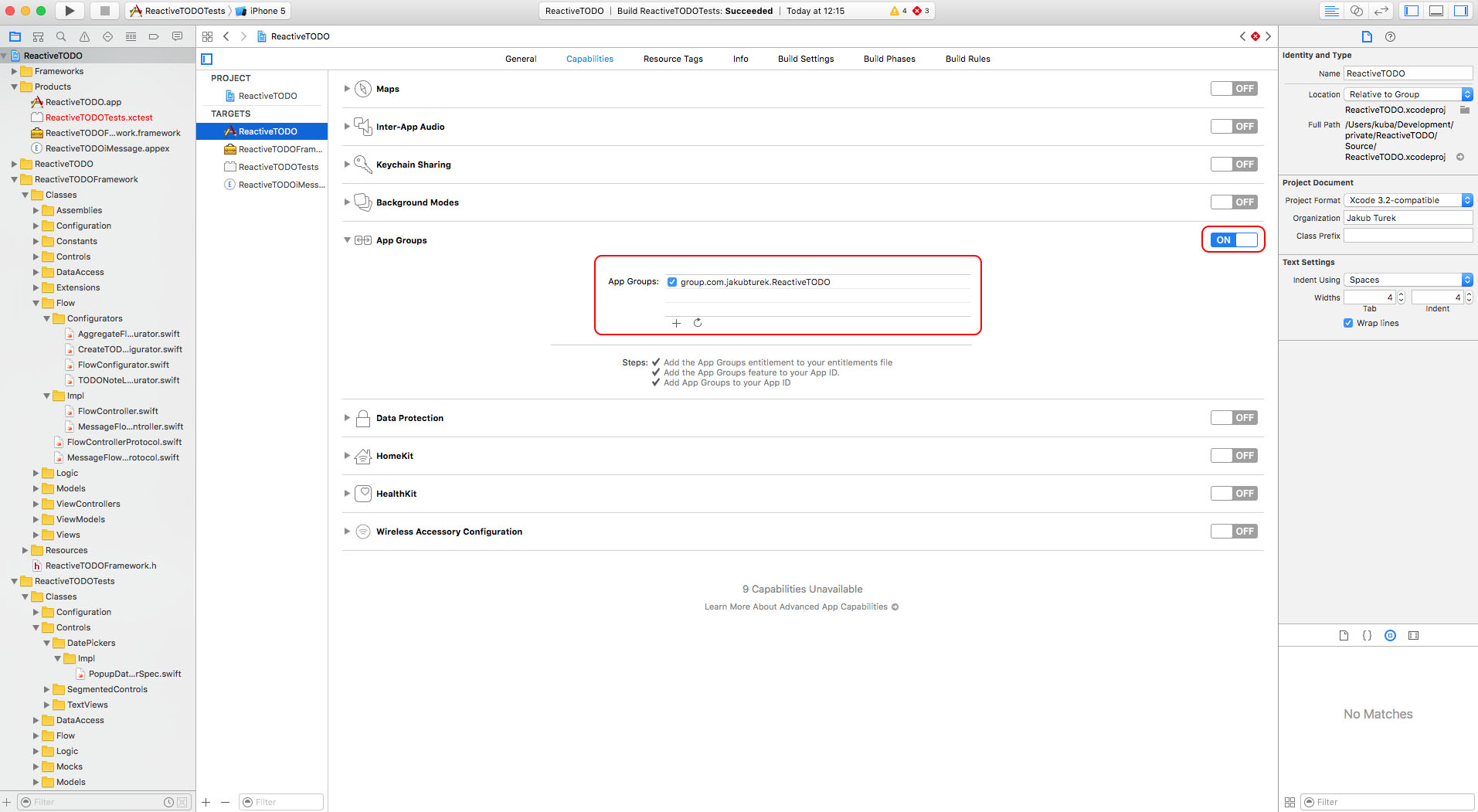 Once again, remember to do the same for both the main target and the extension target.

Now, let's introduce a helper class to use a shared database:

From now on, if updateDefaultRealmConfiguration() method is triggered before the first access to the database, any Realm code with default configuration will use a shared database:

We are ready to implement the extension itself. Right now we have following building blocks at our disposal:

Probably the most effortless idea to integrate iMessages with that list is to create send a note feature. We can listen to an existing selection event, convert the note to a message and insert into a message box. Let's examine how to do the insertion part first.

MSMessagesAppViewController has a self-explaining activeConversation property of type MSConversation. By going one level deeper, one can find out that MSConversation class exposes insert(_:completionHandler:) method, which allows inserting an instance of MSMessage object to a message field. This means that we are good to go if we find a way to convert our model (TODONote) to a MSMessage. Let's look at an extract from MSMessage docs:

Before using an MSMessage object, you must set both its url and layout properties:

We do not want to send any app-specific data, but we definitely want a layout so that our friends can see the note. The docs ask us to create an instance of MSMessageTemplateLayout, which looks like this: 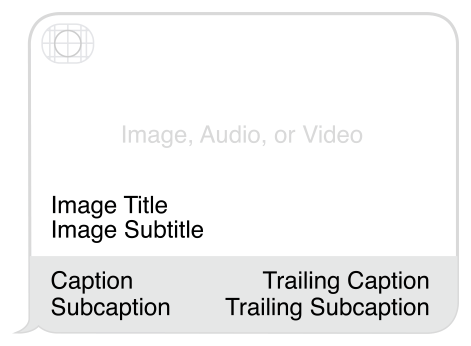 This is it! We have got a game plan now:

Let's start by creating a MSMessage. Since our selection event handler receives a note identifier instead of a full todo note instance, we need a data access object to get a full instance (hyperlinked only to make this post more concise). Having the DAO instance, we can implement MessageFactory as follows.

Notice the @available annotation. It is needed since we are working on a legacy project with the iOS 9 deployment target.

Now that we have a MSMessage factory, we have to attach it to a cell selection event. It is a high time for a small off-topic. ;-)

We arrived at the point where a single view controller class is used both by the application and also the extension. In a view controller centric world we have to introduce a new flag to determine the cell selection logic. Let's call it isInvokedFromMessageExtension for now:

The other option would be to subclass the view controller and override some parts of the source code to achieve same effect. Either solution is not perfect.

There is a third solution which involves using a FlowController pattern. If you are not familiar with the term, I strongly advise you to read the hyperlinked article and use the pattern in future. For now, it is enough to understand that in a flow controller approach you have to conform a view controller to a protocol like this:

Then, instead of performing any logic upon customizable actions (in our case: cell selection) you only invoke a closure:

Then, you roll out a master object which configures the business logic attached to closures. It is called flow controller, because the common scenario is to navigate between view controllers, but the approach is not limited to that. Thanks to this architecture, reusing a view controller is as simple as having two different flow controller objects.

The final step is to configure a todo note list and add it as a child view controller:

And... this is it! After the application is installed, you will be able to send a todo note via iMessage: 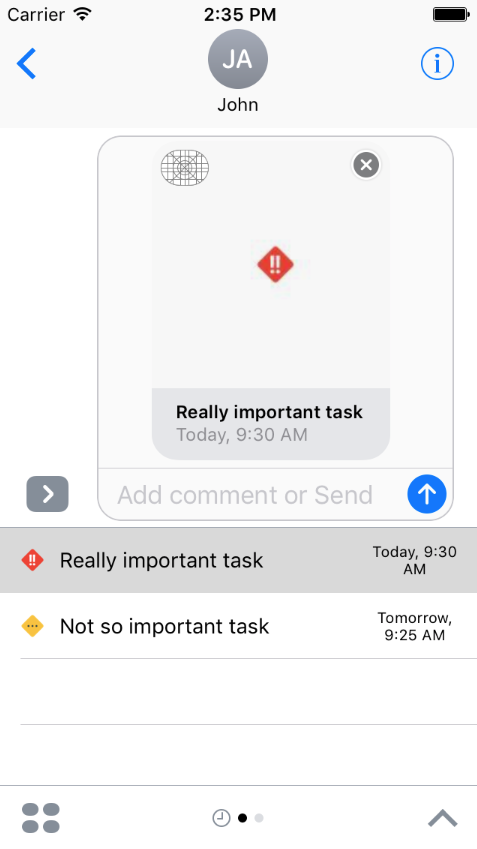 This tutorial explained how to add an iMessage extension to an existing application. I hope that this piece is the only thing you will ever need to do this yourself (even when you are starting an app from scratch).

I also hope that using this example I have convinced you that once you get the architecture and setup of your application right, you can implement a fully featured extension in less than 50 lines of code. That is impressive!

You can obtain a full version of ReactiveTODO application at Github.

UITableView is truly a heart of iOS user interface. It does not…